National Bike Week took place earlier this year for one week, from September 12-18th and Green-Schools hosted a wide range of activities for schools and individuals to get involved. Travel Officers facilitated bike skills workshops across schools nationwide and students were invited to learn from our many bike-related videos and online resources. We celebrated National COW Day, which encouraged students to ‘Cycle on Wednesday’, hosted two webinars featuring our Safe Routes to School and #andshecycles programmes as well as launching our first online Cycle Bus networking event.

Throughout the week Green-Schools ran a successful social media competition: #MyBikeStory. We asked students and schools to take part by sharing a picture or a short video celebrating their bike journey. As a special end of year treat Green-Schools are delighted to reward six participating schools for their engagement with our #MyBikeStory competition.

Five schools during December 6-10th will be treated to an online screening of Wadjda with the Irish Film Institute, and our junior winners will enjoy a special prize of Green-Schools goodies! 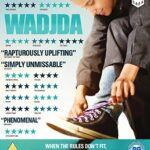 This 100-minute long movie tells a tale of Wadjda, a bright and mischievous young tomboy living in Riyadh. After a disagreement with her friend Abdullah, she is determined to prove herself his better. When she spots a beautiful green bike for sale, she recognises it as the ideal vehicle on which she can assert her superiority and beat Abdullah in a race. Yet her mother fears that cycling is not an appropriate activity for a Muslim girl, and Wadjda has no money. Ever resourceful, she sets about trying to raise cash. Taking part in a Koran recitation competition gives her a chance of bagging the loot she needs. The first film to emerge from Saudi Arabia directed by a woman, Wadjda is a heart-warming yet gently subversive coming-of-age tale that reveals the role of women in Saudi society.

Please check your feed, the data was entered incorrectly.