For a third year extra dimension was added to the Global Citizenship Litter and Waste and Global Citizenship Energy themes of the Green-Schools programme.  Thanks to our sponsors Irish Aid we celebrated with 16 Green-Schools working on these themes at a special award ceremony in Athlone on Thursday, May 19. Both primary and secondary schools were selected as regional winners for the outstanding work that took place in their schools over the past two years. 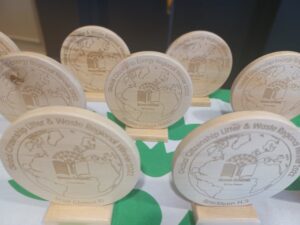 The winners received a theme pennant and a special trophy to state that they were chosen as regional winner for the 2021/2022 academic year as well as their Green Flag.

The Regional winners for regions South, Dublin, Eastern/Midlands and Northern/Western regions were as follows:

At the ceremony we announced the National Global Citizenship Schools of the Year award to four schools.

Muinefliuch NS for their work on the theme including:

Muinefliuch NS were unable to attend the ceremony, so they received a special delivery of the awards at their school on Monday the 23rd of May when they celebrated their flag raising. See video of the day plus a representation of their work as outlined by members of their Green-Schools committee here. Well done to everyone in Muinefliuch NS for their fantastic efforts!

The other National Winners are:

Well done to all the winning schools!