St Olaf’s National School is a mixed primary school in Dublin. There are 25 staff and 495 students. They began working on the Biodiversity theme in 2017 and were awarded the Biodiversity Green Flag in May 2019. These are the steps the school took to achieve their flag.

To begin the process of working towards the Green Flag for Biodiversity St Olaf’s first assembled their Green-Schools committee. There are two teachers on the committee. Students from third to sixth class were then invited to be selected for the committee by writing a letter explaining why they wanted to join, why the environment is important and what they could do to help the environment. Two students from each class were then chosen based on their letters.

The committee meets every fortnight. They assisted in creating the Action Plan for the school and have helped to promote work being done by different classes to the rest of the school community.

They are also responsible for making sure the steps taken to achieve previous the four previous Green Flags (Litter and Waste, Energy, Water and Travel) are still running smoothly within the school.

This is an important step to get an idea of the current situation in the school regarding biodiversity. Carrying out a review allowed the school to see what steps needed to be taken to improve upon their current situation. There were three parts to the review: 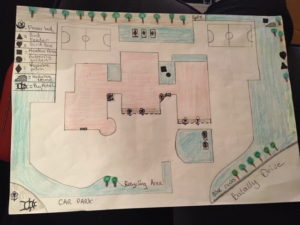 Following these steps, the school was ready to take action to improve the biodiversity around their grounds as well as increase student’s knowledge and interest in the wildlife around them.

The committee created an action plan which set out what tasks would be completed around the school and what classes or groups would be responsible for them.

There were lots of different steps taken to try to increase the biodiversity in and around the school’s grounds.

St Olaf’s got involved with The Great Plant Hunt project which allowed each class to learn about a selection of species of plants and animals through a variety of resources provided (all primary schools who are working on the Biodiversity theme are eligible to take part in this project). The school held an action day which allowed all the classes in the school to get involved in fun biodiversity activities and to see the changes that had been made in the grounds. Each class went on a habitat trail around the school and identified the different plants they could find. Younger classes completed art projects based on the nature they had seen outside. Older classes also held debates about climate change and biodiversity. 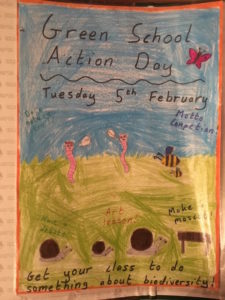 The school also had some nature experts visit classes within the school to teach them about different aspects of biodiversity. These included:

The school used various methods to keep track of the changes made throughout the two-year cycle. One important method was carrying out the same biodiversity awareness survey at the end of the programme which had been carried out initially. There were huge strides made by participants in terms of their awareness and knowledge of biodiversity. See chart: 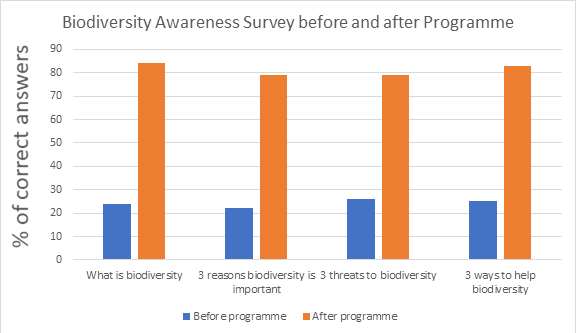 A second habitat map was made of the school grounds in year two to track the changes made and to note the increase in areas of biodiversity.

The school also informally noticed an increase in robins in their grounds as well as the common frog.

Additionally, the school continued to monitor the changes brought in during the previous four themes to ensure they were being kept up throughout the school. They allocated responsibility for each of these four themes to a different year group who produced educational materials and posters for the rest of the school community. Other practical measures taken include:

St Olaf’s found that the biodiversity theme fit in naturally with lots of topics covered within the existing curriculum. Teachers were able to bring in biodiversity under the following subjects:

St Olaf’s carried out this programme in a way that included the entire school and allowed everyone to get involved.

St Olaf’s made a Green Code for their school:

We have a dream

To keep the world green

The whole school community has really enjoyed working on this programme. Creating an awareness about Biodiversity and learning about the variety of all life forms on this earth and their habitat has really interested and engaged both staff and pupils. Discovering all the species and habitats that are already in our school grounds and exploring how we can create more habitats to encourage more species has been really interesting and exciting. The programme has fostered in the children a respect and appreciation of all living things and their environments and has enabled them to become active agents in the conservation of the environment for future generations.