Green-Schools Travel has been working with teenage girls to develop a campaign that shines a light on barriers that are preventing them from cycling and start some necessary conversations. #andshecycles is a national campaign that wants to help girls get back on their bikes while addressing some of the reasons they’re reluctant to in the first place.

We have been working with schools around the country to increase cycling numbers for over ten years. Because of this work we realised that although teen girls wanted to cycle the numbers weren’t increasing at the same levels as their male counterparts. So we asked why, and #andshecycles was born. 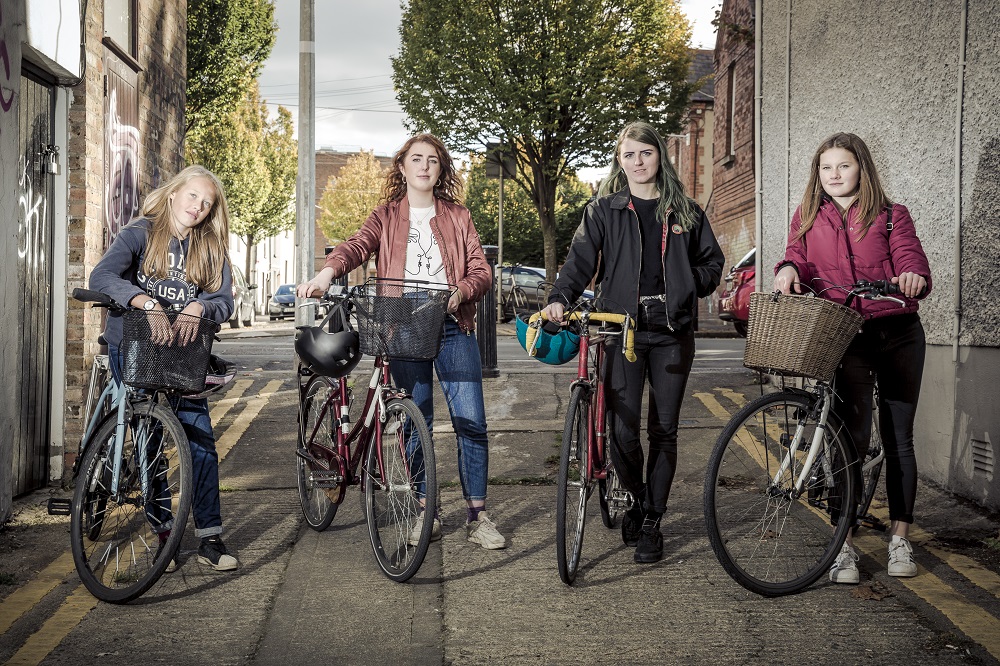 #andshecycles focuses on encouraging young women, particularly teenagers, to cycle while recognising and discussing the reasons why they feel that cycling is not for them. Why are young women avoiding the bike as a means of transport? Research undertaken by Green-Schools revealed that notwithstanding the usual concerns facing every cyclist (lack of cycle lanes, safety concerns) young women were also dealing with social issues such as peer pressure; harassment on the roads from drivers and young men; and a general perception of cycling as being “uncool”.

#andshecycles hopes to change and challenge these issues and perceptions through video, social media and continued liaison with students. Green-Schools hopes that by discussing and dissecting the reasons why young women are not cycling, we can highlight the positives, the ways to overcome and, through acknowledgement, help those students who might otherwise cycle to continue to do so or begin to do so in the future. 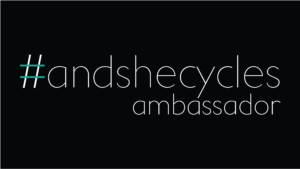 What is the #andshecycles Ambassador Programme?

The #andshecycles Ambassador Programme is a unique development of this campaign with a focus on addressing the teenage cycling gender gap. This will be achieved through building and supporting student leaders to take action to enable and empower teenage girls to cycle to school.

There are three programme objectives:

The #andshecycles Ambassador Programme, then, is about teenage girls taking action and leading the way so they themselves and others have the genuine option to cycle.

Since this programme is in part about developing and supporting female role models and leaders to tackle the cycling gender gap, applicants are limited to girls/young women attending an active Green-Schools secondary school that is currently on the Travel or Global Citizenship Travel themes. Students can apply individually or in teams of two or three. Boys and/or non-binary people within these schools are welcome and encouraged to work with and support these ambassadors to address the cycling gender gap.

Is the programme only for ‘cyclists’?

This programme is open to girls who do not cycle but would like to as well as girls who cycle. We welcome those who are passionate about creating change to enable girls to cycle!

Do I receive any resources for participating?

Successful applicants will receive an ‘Introductory Pack’ including a branded #andshecycles Ambassador hoody and pin, and #andshecycles badges for students in their school that are allies of the campaign.

What is involved in the programme?

Will there by opportunities to network with other students?

Ambassadors will have the opportunity to meet with other Ambassadors from across the country in our online training and monthly ‘Network Gatherings / Support Sessions’ that take place throughout the ‘Action Stage’ of the programme between February and September 2021. These gatherings will be an opportunity to share ideas, support one another, generate collective motivation, collaborate, and build solidarity as Ambassadors for tackling the cycling gender gap.

Read more in the document below or contact us to find out more about how to apply to take part.

Green-Schools officially launched the #andshecycles campaign on Thursday September 19, at an event in the Science Gallery, Trinity College Dublin. Over 100 people attended the launch event, which included a welcome reception showcasing the #andshecycles portraits by photographer Ste Murray of young female cyclists. The exhibition was followed by the premiere of the official #andshecycles campaign video which can be viewed below and shared on social media platforms.

The panel discussion, chaired by RTÉ 2FM DJ Tara Stewart features International Irish Cyclist and new UCD student Lara Gillespie; student Aislinn McDaid; Green-Schools Travel Officer Caitríona Buggle; and Health Services Research professor, Dr. Catherine Darker. The audience was primarily made up of female secondary school students, along with journalists and cycling enthusiasts. Have a listen to the many interesting conversations which were raised during the panel discussion and the concluding Q&A session.

On February 6, the #andshecycles campaign launched it’s Roadshow in Castlebar, Mayo with a panel event and exhibition in the Leisure Complex at Lough Lannagh. Broadcaster, Angelina Nugent, lead the event as MC, along with panellists including Green-Schools Travel Officer, Caitríona Cunningham, Mayo Ladies Footballer Katheryn Sullivan, cyclist Saoirse O’Reilly and Mayo secondary students St. Joseph’s Ann Sibi, Davitt College’s Emer and Fiona Minish and Sacred Heart’s Ariadna Gomez-Kelly. The participating women and students on the panel had so many positive and encouraging stories but feel strongly to speak about the issues that they face as they take to the roads as a young female cyclist. Have a listen to the audio recording in the YouTube link below.

#andshecycles hopes to change and challenge these issues and perceptions through video, social media and continued liaison with students. Green-Schools hopes that by discussing and dissecting the reasons why young women are not cycling, we can highlight the positives, the ways to overcome and, through acknowledgement, help those students who might otherwise cycle to continue to do so or begin to do so in the future.

To highlight the issue and as part of their ongoing Green-Schools Travel programme more than 40 pupils from 1st to 6th year in The Ursuline College took part in a group cycle to the beach last Friday. Prior to taking part in the cycle they discussed the barriers to teenage girls cycling and watched a short film developed by the Green-Schools team. Lisa McDaniel and Áine O’ Loughlen, Green-Schools Travel Education Officers worked closely with the Green-Schools Co-ordinator, PE teachers and the local Garda Superintendent and traffic core to organise a 16km cycle through the town, Finnisklin Industrial Estate and along the cycle lane leading to Strandhill village and back. 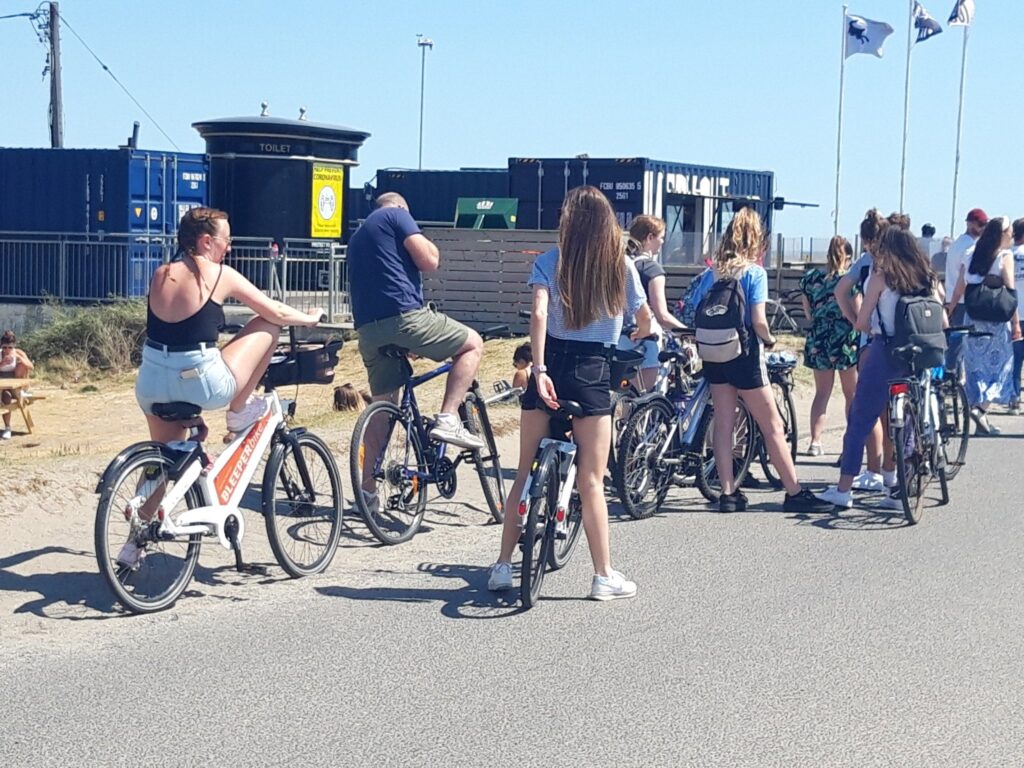 The landscape of our streets has changed dramatically since the 2020 lockdown. We noticed the sudden overnight flip from the din sound of whizzing traffic to the sounds of insects and birds reclaiming space. Movement was slowed, yet not before long, there has been a positive influx of cyclists taking to the quieter streets to enjoy making the most of their 2-5km zone. In many towns and streets, space was reclaimed to allow for recreational walkers and cyclists to share the pavement. The motor vehicles, which once dominated this public space, were brought to a slow finally allowing children, families and individuals to fully enjoy the new terrain of their communities. We are seeing many new cyclists hopping back in the saddle to experience again the joys and the freedoms of the bicycle, and many of those, much to our delight, are young women! It has been wonderful to see multigenerational cyclists taking to the streets and it looks like this trend is set to stay.

In place of Bike Week 2020, Green-Schools launched a week-long initiative #CelebrateCycling, which celebrates the many cyclists, both novice and accomplished.  Have a listen to RTÉ’s Ecolution cycling-special Podcast episode featuring Green-Schools Cycling Development Officer Allison Phillips, Green-Schools Travel Manger Jane Hackett, Green-Schools students Evie and Fraya. Also featured on the episode, around 23 minutes in, is Secondary School Development Officer Robbie Egan, and #andshecycles panelists Davitt College’s Emer and Fiona Minish who each speak about their experience on the campagin.

As part of the EU Erasmus+ Project: Sustainable Mobility, Sustainable Community, six students from St. Tiernan’s Community School travelled to Copenhagen in Denmark for the 3rd cultural exchange. During the week-long October visit to Copenhagen, St. Tiernan’s students were immersed in Danish cycling culture. At the start of the week, students from each country presented their findings on research around travel behaviour to the Danish partner school, Randersgades Skole. St. Tiernan’s students showcased the new Green-Schools #andshecycles campaign to the group, which led to much discussion on the issue that, in Ireland, fewer than one in 250 girls cycle to school each day.

St. Tiernan’s students were tasked to interview a cross-section of Erasmus+ students from the four participating countries, with the question: do the same number of boys and girls cycle in your home country?

Have a look at the video clip to hear what impressions students in Ireland, Lithuania, Spain and Denmark have on gender in cycling from their home countries. The results are really interesting and lead us to ask more questions, like why does cycling culture differ from country to country? And how can we improve cycling culture so that all members of society feel that cycling is for them?