Scoil Mhuire Junior School is a mixed primary school in Blakestown, Dublin with 300 students and 30 staff members. They had a great time carrying out the activities based around the biodiversity theme and as a result of their hard work were awarded the Green Flag for Biodiversity in May 2019. These are the steps they followed to reach that point.

Scoil Mhuire’s Green-Schools committee is elected at the start of each school year. It is made up of two children from each of the first and second classes. Some children will sit on the committee for two years as they move from fist to second class. The committee also includes the Green- Schools Coordinator, the principal, the caretaker, a teacher from each year group, SNAs and a SEN team teacher. The committee meets once a month to coordinate the Green-Schools activities for the school.

To make improvements on the biodiversity around the school the committee first carried out an environmental review. This was a key step for the school to allow them to assess their current situation and discover what areas to focus on. The three stages to the review were: 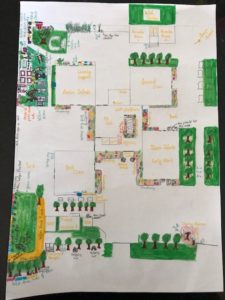 The committee created an action plan to get the whole school involved in various activities aimed at improving students# knowledge of biodiversity as well as monitoring and helping to increase the biodiversity in the school grounds.

The practical improvements of the grounds got off to a great start with the help of a large group of volunteers from a local college who assisted in putting in colourful fencing and benches, planting winter vegetables and created a new area for planting at the front of the school. 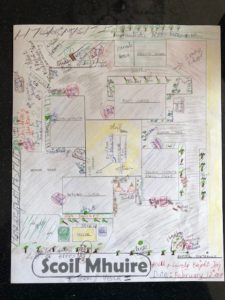 The committee and various classes were then able to take lots of practical action throughout the course of the two years to help biodiversity around the school. Here are some of the steps taken:

The Green-Schools committee also ran activities aimed at increasing students’ knowledge of and interest in the biodiversity in their surroundings. These included:

They assessed each class regularly on a variety of topics which included checking:

The school found that learning about biodiversity fit in with many subjects already present on the curriculum. These included: 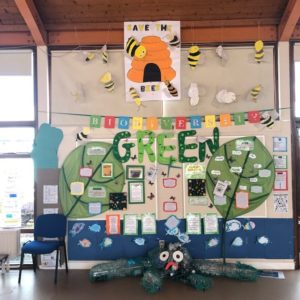 Several steps were taken to make sure that the entire school community including students, teachers and parents were aware of and involved with the steps being taken involving biodiversity in the school.

There is a regularly updated Green-Schools notice board as well as several nature displays around the school.  Any news or events are included in the school newsletter and go onto the school website.

The school produced a “Biodiversity Information Booklet” which explained what biodiversity is, the importance of it as well as the threats to it. It also gives practical tips on how biodiversity can be conserved in the home or in school.

There are whole school assemblies every month and there is always time allotted to the Green-Schools committee to update the rest of the school on what they had learnt and organised about biodiversity. For example, the committee themed one assembly on trees and different members of the committee led the assembly on several topics. Some members taught the rest of the school how to identify trees and what trees there were in the school grounds, others talked about the importance of trees and how they help humans and the rest of the ecosystem and another group of committee members read out poems about trees. The assembly finished with the entire school singing a song about trees!

The wider community has also gotten involved. The school has linked up with a local community centre and students from a local college who have assisted with the maintenance of the garden and creation of several areas of the biodiversity garden.

This is the biodiversity green code for the school decided upon by the committee:

Biodiversity is so cool

Let’s work together in our school.

Flowers for the bees, birds in the trees.

Biodiversity, if you please!

I do believe we have the most amazing school grounds here and the children saw some of the birds and insects in all their glory this year. We had been taking it all for granted. They loved the bird watching.