There are seven crucial steps to compete before being awarded a Green Flag. Here is how Salesians went about the process.

Firstly, a Green-Schools Committee was set up. The committee is made up of a mixture of students and staff members. There are four first year students, four second year students and six sixth year students. It also includes three teachers and two caretakers. Each year the committee advertise for new members at the school’s extra- curricular fair and in the school newsletter. New members are invited to join, and members may stay on the committee throughout their school career. The committee has divided up roles which include Chairperson, Vice Chairperson, PRO, Treasurer, Vice-Treasurer and members.

The committee meets weekly to organise Green-Schools activities and to direct the school through the process of achieving the Green-Schools Biodiversity Flag.

Based on what they had learned from the environmental review the committee created an action plan to improve biodiversity and knowledge of it within the school. This listed the actions they would take, who would be responsible for carrying it out and the timeframe it would be completed in. Different classes and groups in the school undertook several practical improvements in the school garden.

The school held a Day of Action which got lot of different classes involved. One of the teachers led planting workshops for groups of first year students and there was a biodiversity orienteering activity organised partly by the transition year students.

The school also invited several nature experts in to provide workshops to the students to teach them about and to get them more engaged with biodiversity. This included taking part in the LEAF (Learning About Forests) programme which the students found very hands-on and helpful in identifying habitats and species in their school grounds.

The committee conducted the biodiversity awareness survey at the beginning and at the end of the two-year process to chart the progress and see how much students in the school had learned about biodiversity.

They found there was a large increase in the students who were able to correctly answer questions regarding biodiversity at the end of the two-year cycle – see chart on right. 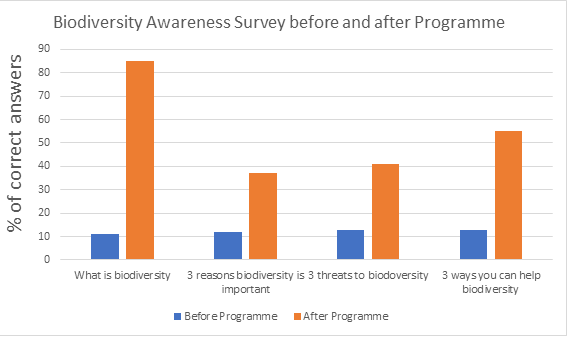 The school noticed an increase in certain animals in the school grounds including butterflies and robins.

They also completed a second habitat map to note where changes and improvements had been made to the school grounds.

The committee also continued to monitor the changes put into place for the previous four themes including:

During the process of undergoing work towards the Biodiversity Green Flag the school found that the activities involved fit in with many parts of the curriculum including:

The committee used a variety of methods to keep everyone in the school and the wider community up to date on the Green-Schools biodiversity activities.

Salesians kept it short and sweet with their Biodiversity Green Code: