Sacred Heart School is a Secondary School in Westport, Co. Mayo. It has 590 students and 55 teaching staff. They were awarded their Green Flag for Biodiversity in May 2016.

An open invitation to all students to attend committee meetings was issued each September over the intercom; those who turned up agreed to form the main committee. Other students gradually came on board to form sub-committees.

Most of the roles of greatest responsibility were taken by fifth Year students (most of whom have been involved on the committee for many years). These included the roles of: Chairperson, Vice Chairperson, Secretary and Vice Secretary. The roles of Public Relations Officers were divided among six students from first and second Year. Different sub-committees were also established for different tasks. These consisted of strong representation from all non-exam years.

Two teachers coordinated the programme overall, and four other teachers assisted where needed.

The Committee carried out all three ‘Essential Actions’, for the Environmental Review, to get a picture of where their starting point was, namely:

The Committee did further work for the Environmental Review, to get a very clear picture of their starting point (i.e. before any improvements or action was taken). From surveys of their school, the committee concluded that there was a shortage of the following:

The committee carried out three of the recommended actions, they:

They achieved these by carrying out a range of actions that they deemed to be most relevant and suitable to their own school and its locality. These actions included:

Sacred Heart School conducted the obligatory steps of carrying out repeat surveys of the habitat in the school, and awareness levels amongst the school population. 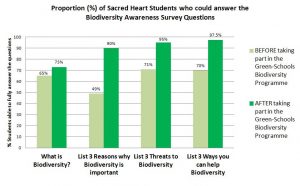 Figure 1: Students’ Biodiversity Awareness Results – these figures show the level of knowledge before and after the school took action to improve biodiversity awareness levels.

Sacred Heart School continued to work hard on maintaining all previous Green-Schools themes. Through efficient structures and delegation of tasks, the committee very successfully kept their environmental standards high across the board. Here are some of the ways they achieved this:

The Sacred Heart Green Code for Biodiversity  (Kitty, Iselia and Sheena, 1A, 2016)

Biodiversity is all around

In the sky and on the ground

from plants to birds

Don’t let it get away

One for all and

biodiversity is loads of fun.

Biodiversity is the way to go

Do your part to show you know

“It has been great to begin to discover and appreciate all the wonderful aspects of nature evident on our own doorstep. This project has opened our eyes to all that is happening under our noses and has made us keen to protect and enhance the biodiversity on our grounds, based on a new understanding of the importance of biodiversity for our survival”.