2019 was a busy and exciting year for Green-Schools Travel, which saw increased participation in sustainable travel initiatives, the creation of new campaigns and the development of a revision theme – Global Citizenship Travel.

Following the 2018 Green Flag award ceremonies, 663 schools were invited to participate in the Travel theme for the 2018/2019 academic year. During the autumn semester, Green-Schools Coordinators and teachers were invited to avail of teacher training in partnership with Local Authorities, the training focused on introducing teachers to their new Green Flag themes. Travel Officers delivered 31 training events nationwide to coordinators on the Travel and Global Citizenship Travel themes.

2019 kicked off with the Big Travel Challenge in February which celebrated its fifth birthday with hundreds of schools participating in the 10 day challenge. St. Peter’s N.S. from Dromiskin, Co. Louth was named ‘Ireland’s Travel School of the Year’ following their efforts to increase the number of staff and students walking to school. Other key events which took place during the year included; Scoot to School Week in March, Walk to School Week in May and Bike Week in June. In addition Green-Schools Travel premiered Ireland’s first Clean Air Week in October 2019. The week-long initiative is the newest campaign from Green-Schools Travel and is focused on raising awareness of air pollution at school gates. The campaign encourages students to develop their own clean air focused campaign or to make a pledge to #BeatAirPollution in order to create a healthy environment around the school gate and to increase the number of students who actively travel to school.

The Green-Schools Travel programme was selected to present at the international Velo City Conference which took place in June 2019. The conference was attended by thousands of delegates from around the world and GreenSchools presented on cycleability audits, gender and cycling and the overall programme. Early in the year, Green-Schools Travel partnered with Cyclist.ie to coordinate the new EU Erasmus+ Project: Sustainable Mobility, Sustainable Community in Ireland. The three-year project launched with a cultural exchange in March to Corella, N. Spain. St. Tiernan’s Community School students travelled to Spain with Green-Schools Travel Officers and volunteers, where they developed partnerships with fellow participants including ECF members Biciclistas de Corella in Spain, ECF members Frie Fugle Denmark and Sūduvos Vietos Veiklos Grupė in Lithuania. Two more exchanges between the groups took place with Green-Schools Travel welcoming 50+ visitors to Dublin in June, followed by the 3rd exchange in Copenhagen in October.

A new campaign was developed to focus on increasing the number of teenage girls who cycle to school. The campaign entitled #andshecycles was launched in September 2019 following focus group research with teenage girls from participating schools. The campaign gained widespread media attention and was featured on RTÉ News, The Irish Times and the Sunday times as well as on social media.

Read the full report in detail below 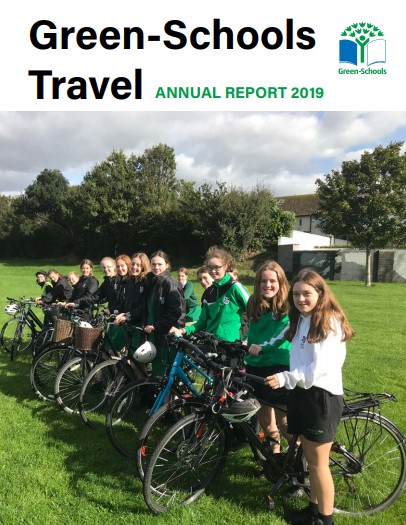