Scoil an Spioraid Naoimh is a primary school in Roxboro, Limerick with about 300 students and 22 teachers. They were awarded the Green Flag for their excellent work on the Global Citizenship Food and Biodiversity theme in 2022. Let’s take a closer look at how they went about achieving this.

The Green Schools Committee was made up of students in sixth class, so the members changed in each of the two years. As well as the students, the committee also included two coordinators, the school principal and the caretaker. The committee kept the rest of the school updated and involved in the theme throughout. They prepared presentations to share information with other classes in the school and also used the school’s “Aladdin” system, the noticeboard and newsletters to keep everyone informed. They also organised competitions for students in the school to take part in.

Before taking any action on the theme the school took a look at the existing knowledge of students around food, growing and the connections between food and biodiversity by carrying out the Awareness Survey. They found that many students had some experience growing food already, which was a great start! One of the sixth classes also took responsibility for creating a food habitat map of their school grounds which showed the food growing areas and other habitats around the school. 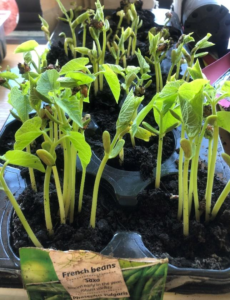 The staff and students carried out a huge array of actions. To get started on the growing side of things, the class teachers decided which crop would be best for their class to plant. A selection of pots and raised beds were sourced before potatoes, tomatoes, carrots, spring onions, peas, strawberries, French beans, onions and herbs were planted. Classes initially planted their seeds in pots indoors before moving them outside later in spring. Different classes used the produce to make a variety of dishes including baked potatoes, fruit muffins, carrot and herb dip and vegetable soup. They also took part in some interactive, online cooking demonstrations. The school chose the topic of Pollinators to study in depth. The sixth class found that it fit in well with the Geography and Science curriculum as they learned about the different parts of flowers and the role bees play in the process of pollination. Younger classes created a large display on pollinators in school hall.

Connecting with Global and Local Community

Throughout their work on the Green Schools programme Scoil an Spioraid Naoimh always connect with the local community in a variety of ways: by inviting parents to participate in projects, inviting local guest speakers to the school, sharing stories with the parish newsletter and even inviting the local press to a Green Flag raising. During this theme students participated in the “Team Limerick Clean Up” initiative as well as contributing to food related charities at Christmas time.

There was a global outlook with students learning about the Fairtrade movement as well as examining the Sustainable Development Goals. They took part in the “One Million Trees” project which involved each class planting a tree on school grounds so that 10 additional trees would be planted per tree in a country in Africa. 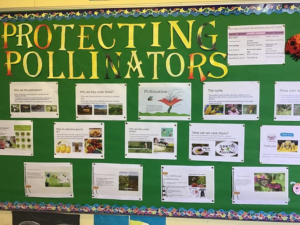 The school held a competition to choose the new Green Code for the theme which resulted in lots of brilliant entries. To complete their work on the theme a repeat of the awareness survey along with an updated food habitat map were completed.

The very practical side of this Green Flag initiative proved hugely beneficial and enjoyable during the challenges working under Covid restrictions placed on schools. The children loved working outdoors on the vegetable garden. They gained very valuable insights into how simple it is to grow vegetables and then to cook and eat their own produce. A large percentage of our students were very eager to use the skills learned in school in their own gardens at home. Our wildflower garden was a riot of colour and attracted a huge number of insects. This simple exercise demonstrated to our students how simple changes can radically increase biodiversity.