We’re very excited to share our campaign video for the #andshecycles campaign:

In Ireland, fewer than one in 250 girls cycle to school each day.

Green-Schools launched its latest campaign ‘#andshecycles’ on Thursday September 19, in the Science Gallery, Trinity College Dublin. #andshecycles focuses on encouraging young women – particularly teenagers – to cycle while recognising and discussing the reasons why they feel that cycling is not for them.

Why are young women avoiding the bike as a means of transport? Research undertaken by Green-Schools, including nationwide focus groups with secondary school students, revealed that notwithstanding the usual concerns facing every cyclist (lack of cycle lanes, safety concerns) young women were also dealing with social issues such as peer pressure; harassment on the roads from drivers and young men; and a general perception of cycling as “uncool”.  #andshecycles hopes to change and challenge these issues and perceptions through video, social media and continued liaison with students.

Green-Schools hopes that by discussing and dissecting the reasons why young women are not cycling, we can highlight the positives, the ways to overcome and, through acknowledgement, help those students who might otherwise cycle to continue to do so or begin to do so in the future.

Portraits by photographer Ste Murray of four young cyclists were also unveiled at the event on Thursday: 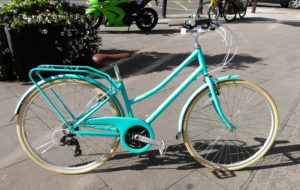 Over the next six weeks, Green-Schools will begin a series of cycling-themed giveaways. Week one is a necklace designed by Lulu & Belle, engraved with a quote from our campaign video, ‘You Do You’. The final giveaway will be a bike (pictured on right) so please visit our Instagram page to get involved and win!