Thursday, November 4, 2021: Cycling in Ireland is “a boy’s thing” according to research conducted by the Green-Schools Programme of An Taisce as part of its #andshecycles Campaign. Speaking at the inaugural #andshecycles Ambassador Awards in Dublin, researcher Robert Egan presented the findings of Green-Schools’ research into the uptake of cycling among young women, which explored the experiences and perceptions of cycling among teenage girls and boys in Ireland.

In Ireland the number of girls who cycle to school remains shockingly low, with only one girl in every 250 students using a bike as their primary mode of transport to school. Through focus groups conducted with boys and girls in 2020 and 2021 students explored their experiences with cycling. In seeking to understand why teen girls do not cycle in the same numbers as their male peers, researchers found that cycling is a social practice that is normal for boys to engage in and socially deviant for girls.

The #andshecycles award ceremony celebrated 23 students from nine secondary schools who trained as #andshecycles Ambassadors in the 2020/2021 academic year. The #andshecycles Ambassador Programme began in early 2021 with three objectives for participants including the development of role models and shaping the cycle-friendliness of their school. Three students – Aimee Kavanagh, Isobella Mary Quinn and Aoife McCarron – were honoured for their Outstanding Achievements as ambassadors; their actions included working with their school’s management for uniform reform in their school, liaising with their local council to improve infrastructure around their school and campaigning to have a Bike to School programme made available to students. Attendees were also treated to a performance of Elaine Gallagher’s Freedom Machine.

At the ceremony, Senior Programme Manager with Green-Schools Jane Hackett said: “When we first launched the #andshecycles campaign we spoke about the reasons why girls were choosing not to cycle. We now know that it’s often not a choice and that the social practice of cycling as a “boy’s thing” prevents young women from experiencing the joy and independence cycling can bring. It’s great to be here today to celebrate these 23 amazing young women who are working to deviate from the norm, let’s hope they bring their friends along with them!”

At today’s awards the audience learned that sweating, the impact on one’s appearance, uniforms, helmets and harassment are some of the main deterrents for teenage girls cycling to school. For young women in Ireland, opting to travel by bike is an act of defiance, deviance, and a break from gender and social norms.

In speaking about cycling as a means of transport for boys – a boy’s thing – the research found that the perceived athleticism needed to cycle; a level of audaciousness needed to tackle seemingly un-cycle friendly roads and a lack of concern for personal safety were linked to showcasing masculinity, leaving girls subject to judgement from peers and social stigma for aligning themselves with male peers through cycling.

A perception of cycling as incompatible with femininity or dominant feminine traits linked to appearance also impacted on the uptake of cycling among teen girls, research found. Modesty was found to be a concern, with uniform skirts in danger of “blowing up” while cycling.

Cycling is also found to be another arena where young women feel “regulated” for engaging in an activity seen as a “boy’s thing”, Participants felt “stared at”; they were “heckled” and in one instance, intimidated and chased by a group of young men on bikes in a public space.

At the event Egan concluded that intersectoral policies and programmes are required to undo cycling as A Boy’s Thing during adolescence, a move which would benefit all genders. Making cycling compatible with femininity is one avenue towards increasing uptake: actions such as promoting Dutch-style bikes which are more compatible with uniform skirts and increasing the number of safe segregated cycle lanes are two which could be considered. The other avenue towards increasing uptake is to promote a rejection and subversion of the practices which keep girls from cycling, by all genders and none. Programme like #andshecycles can form part of this, through the #andshecycles Ambassador Programme which was celebrated at the ceremony. 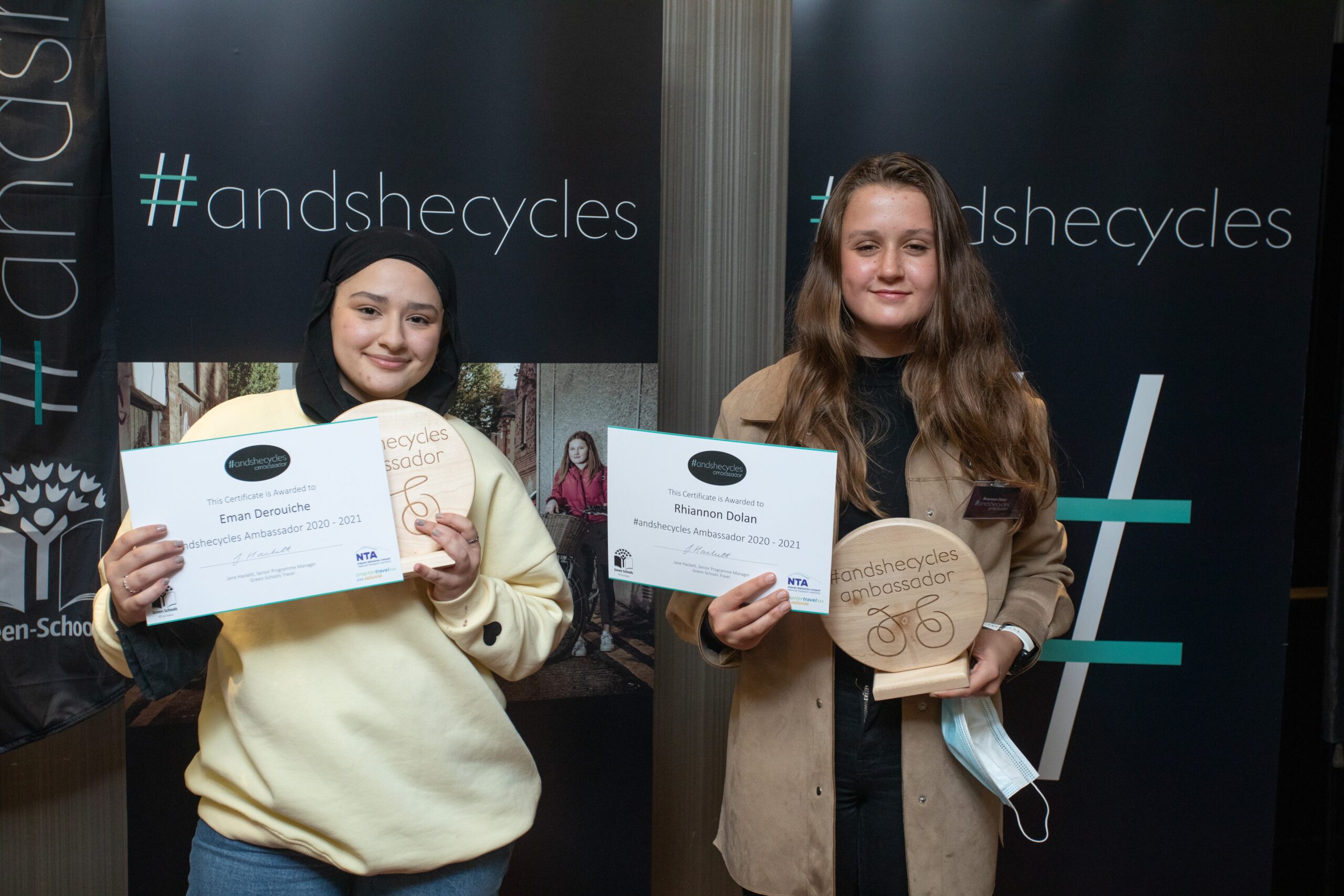 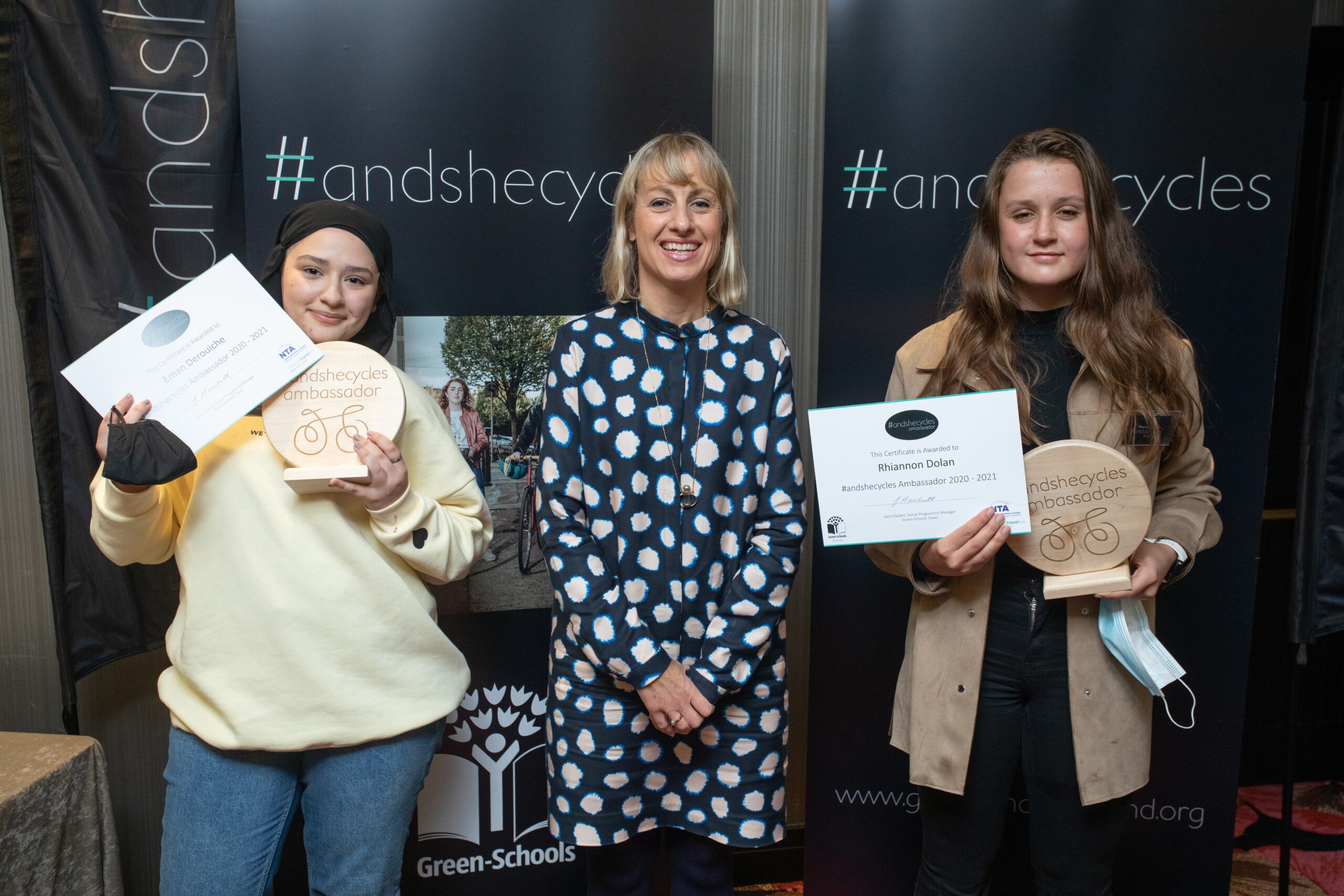 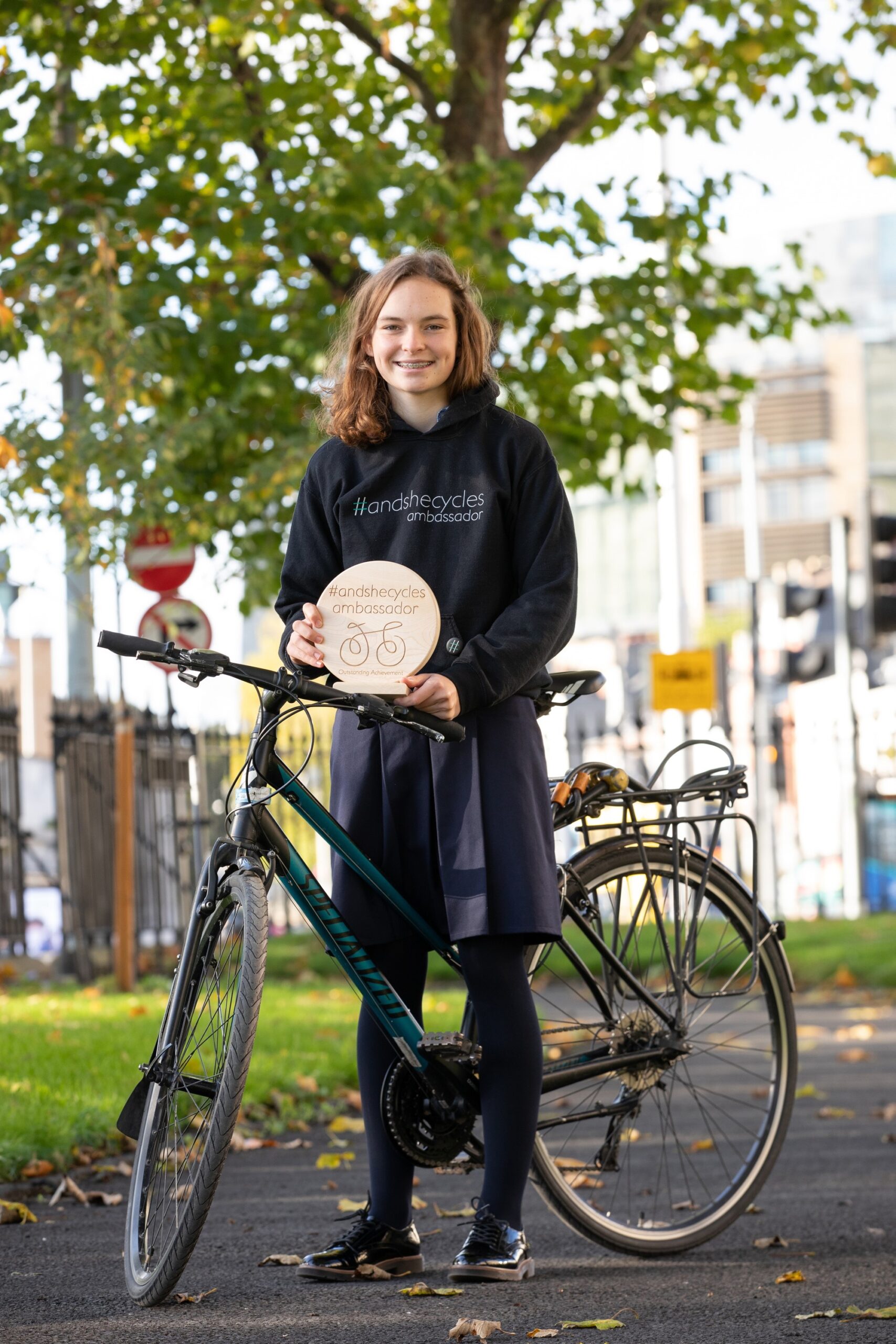 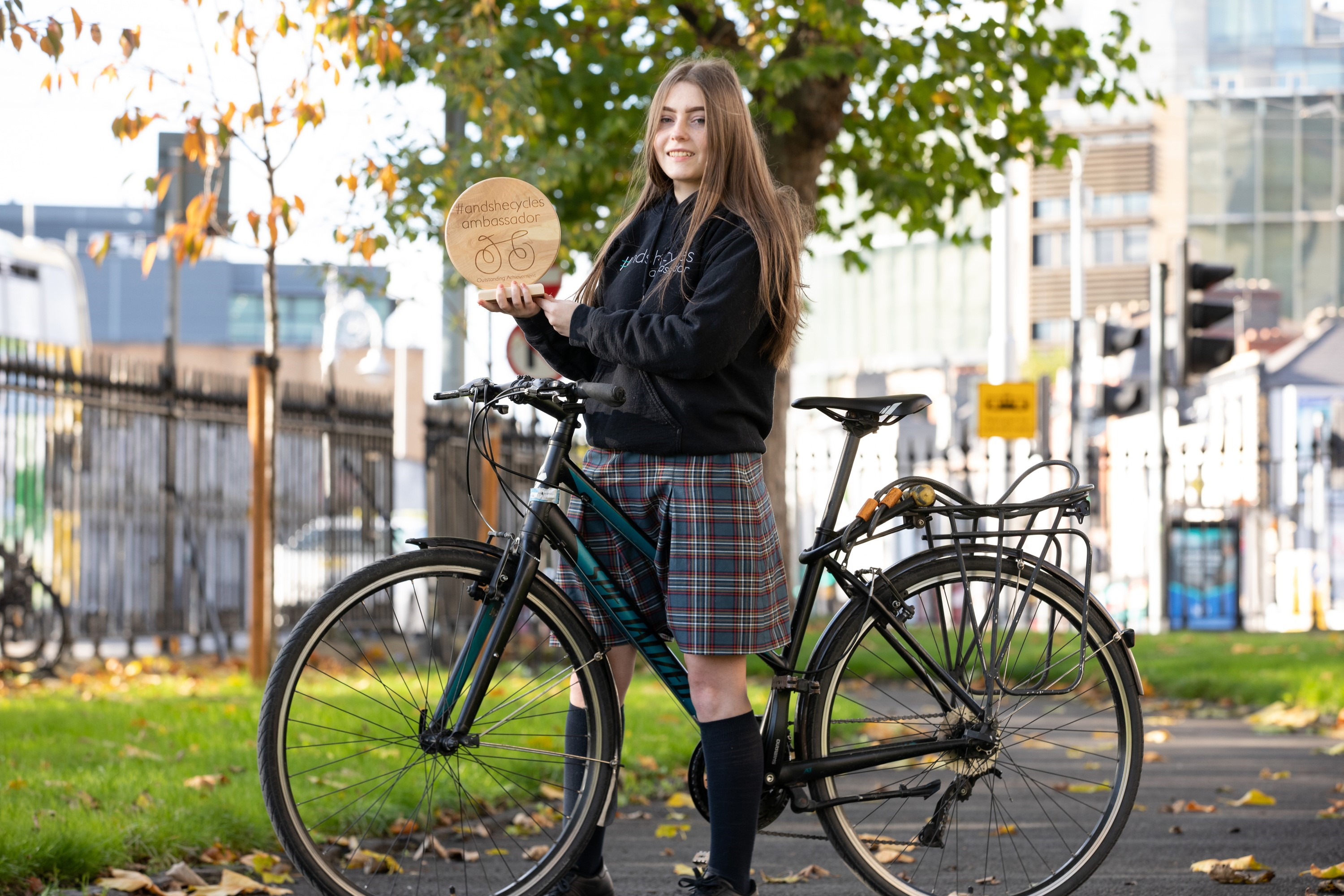 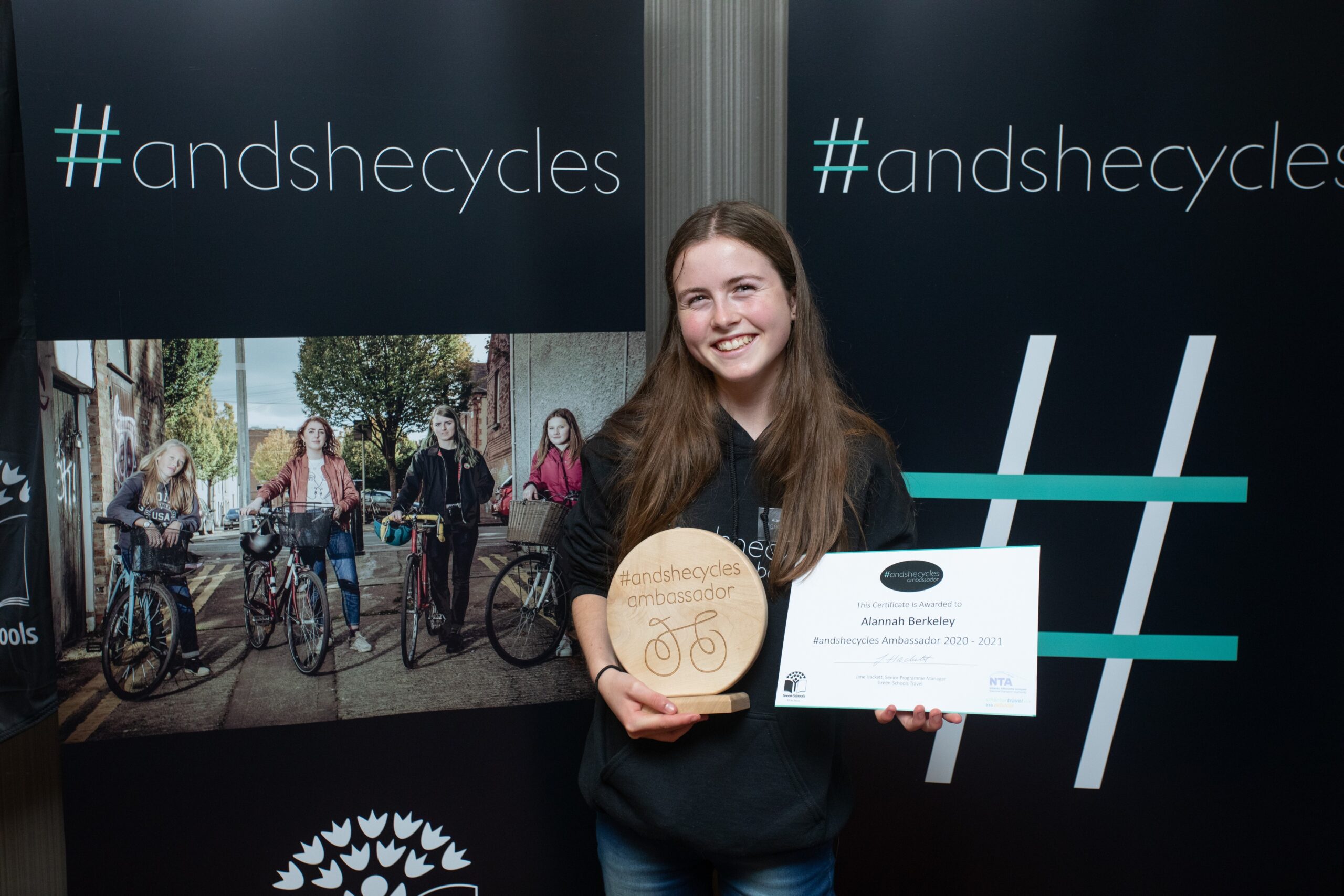 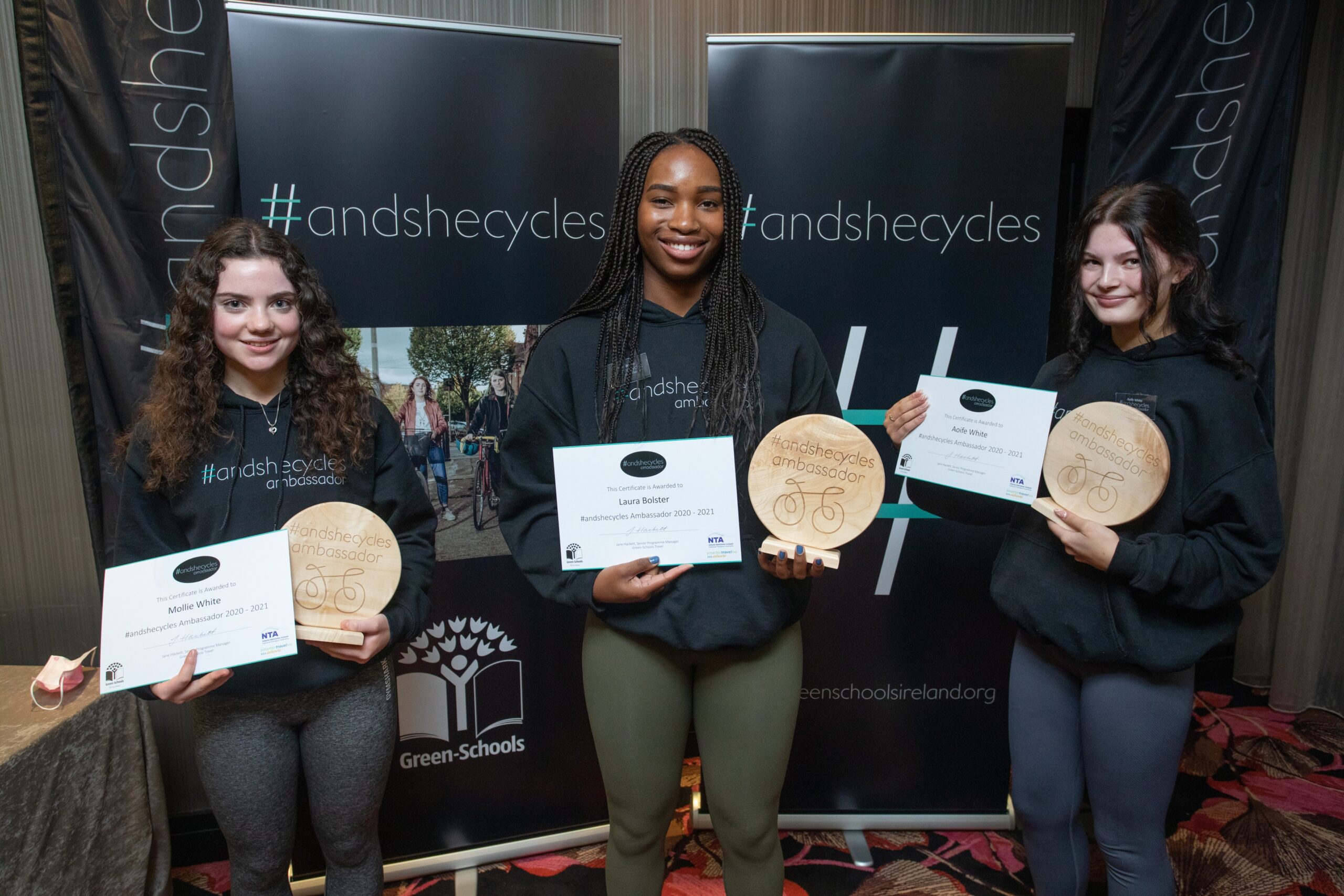 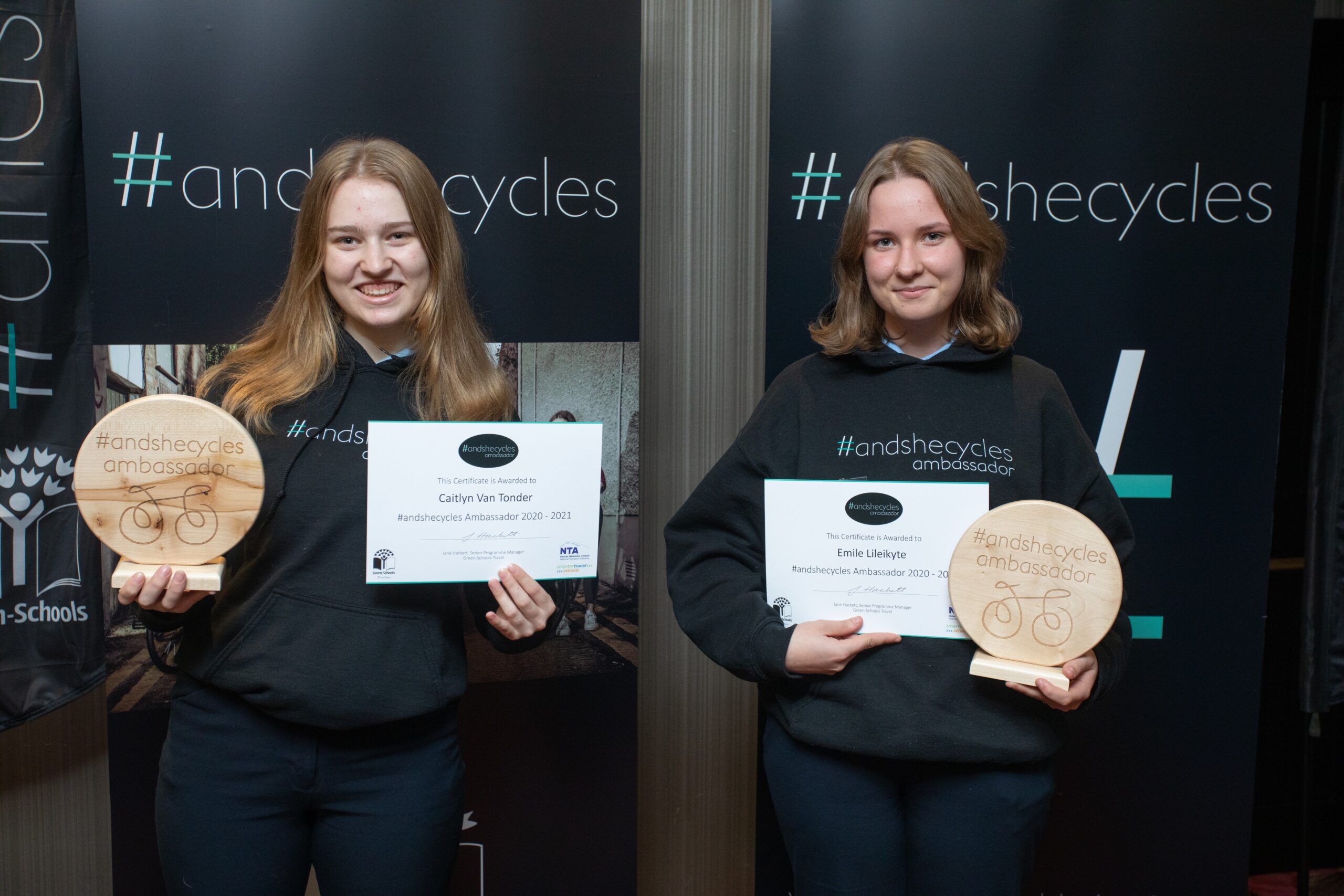 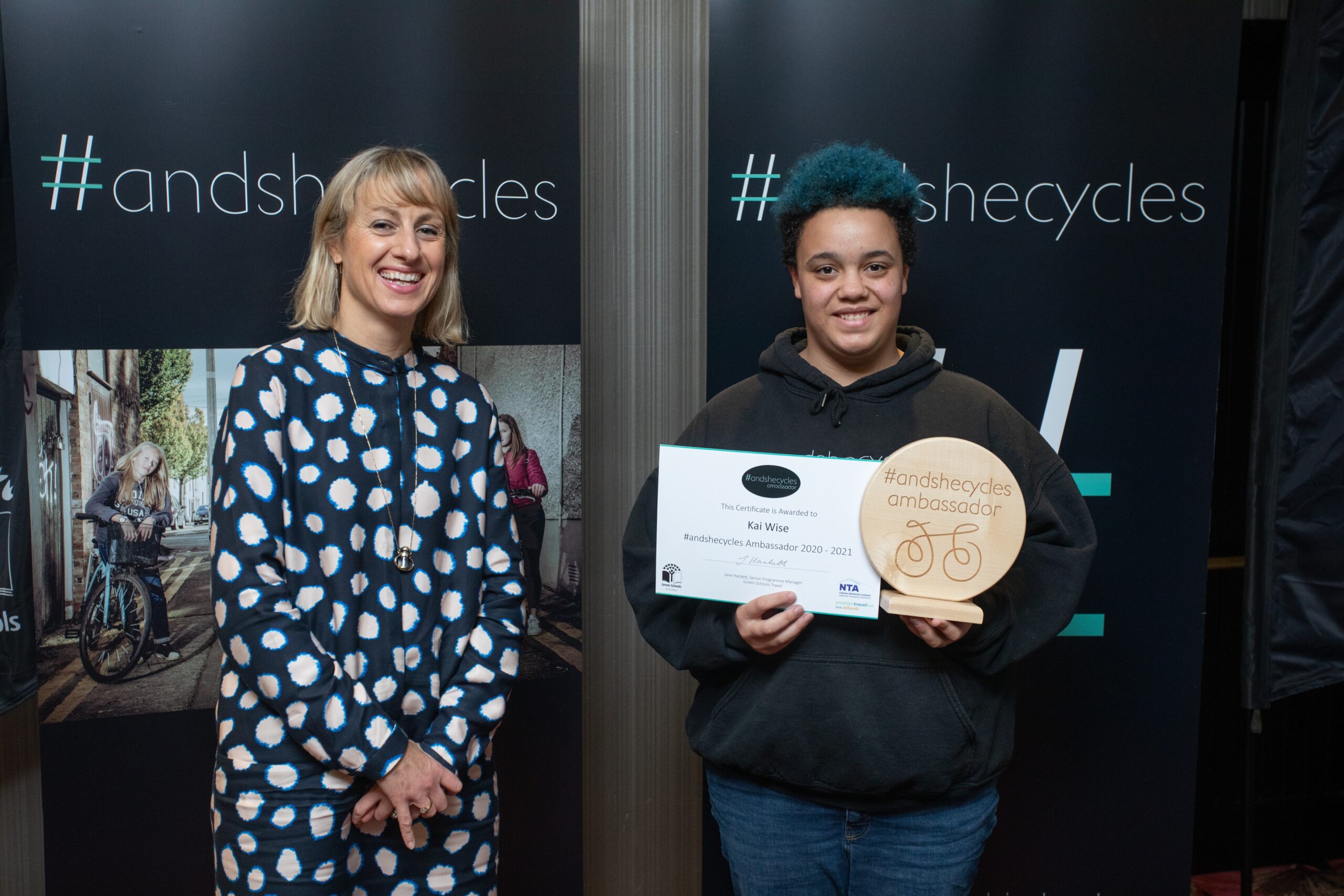 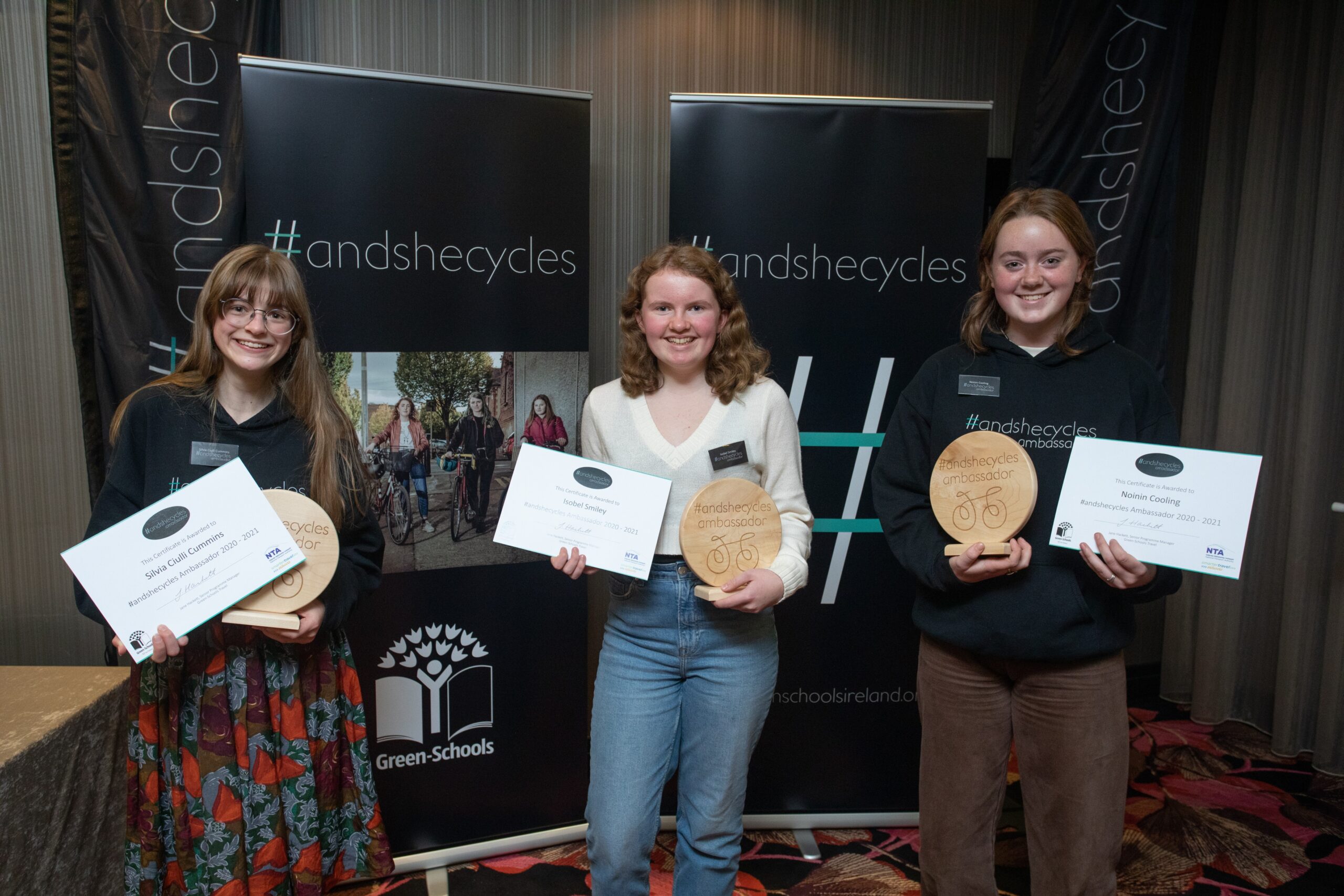 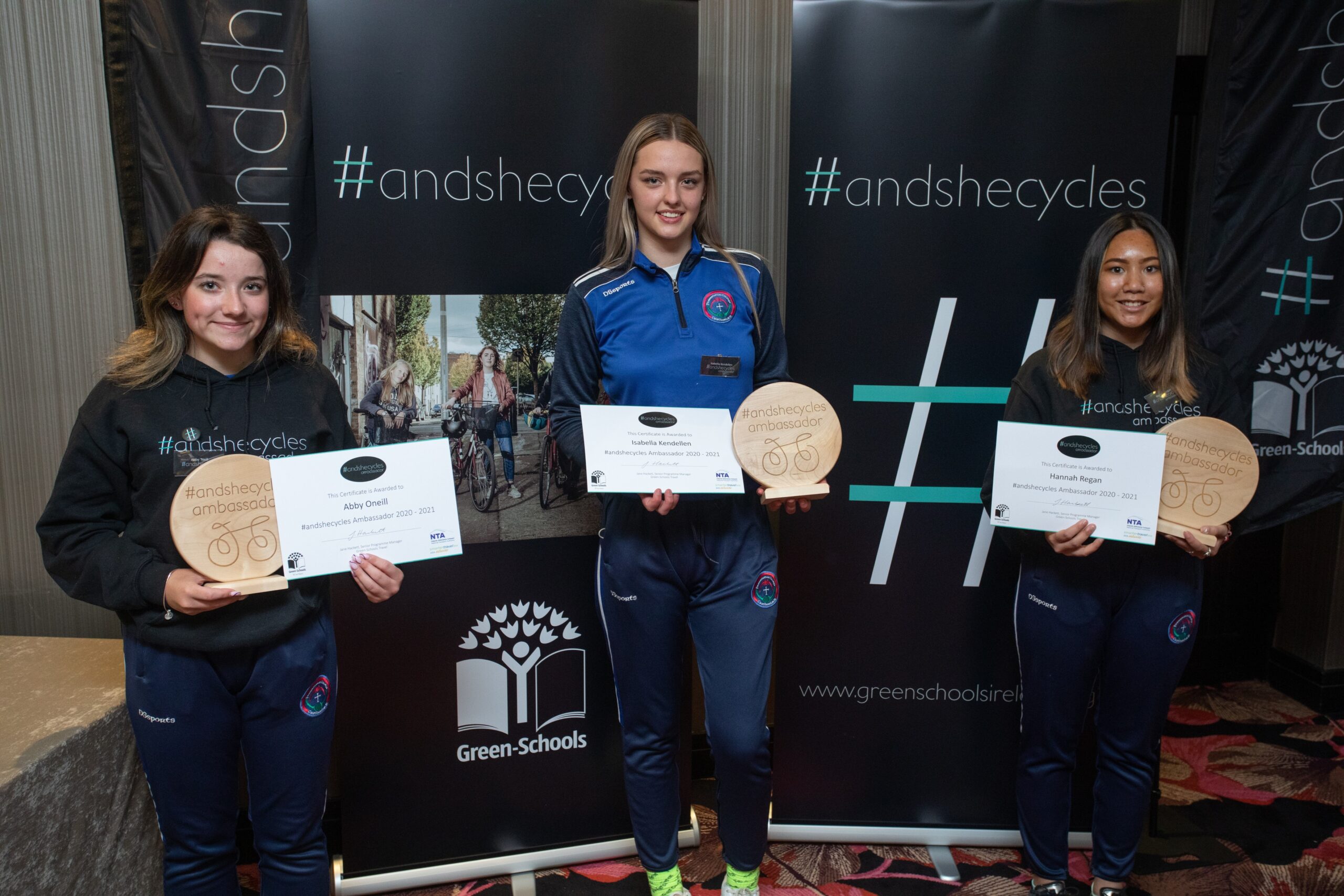 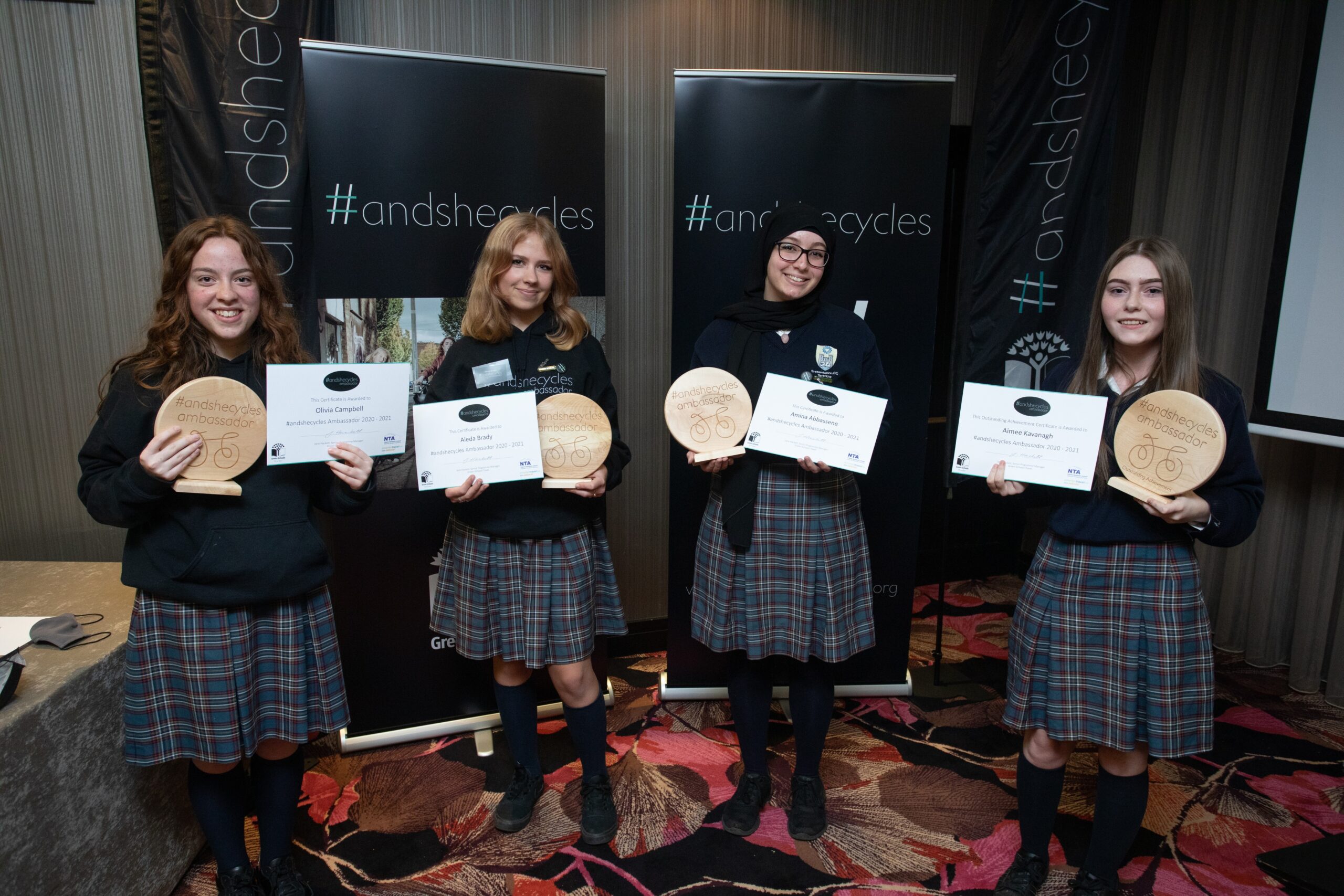 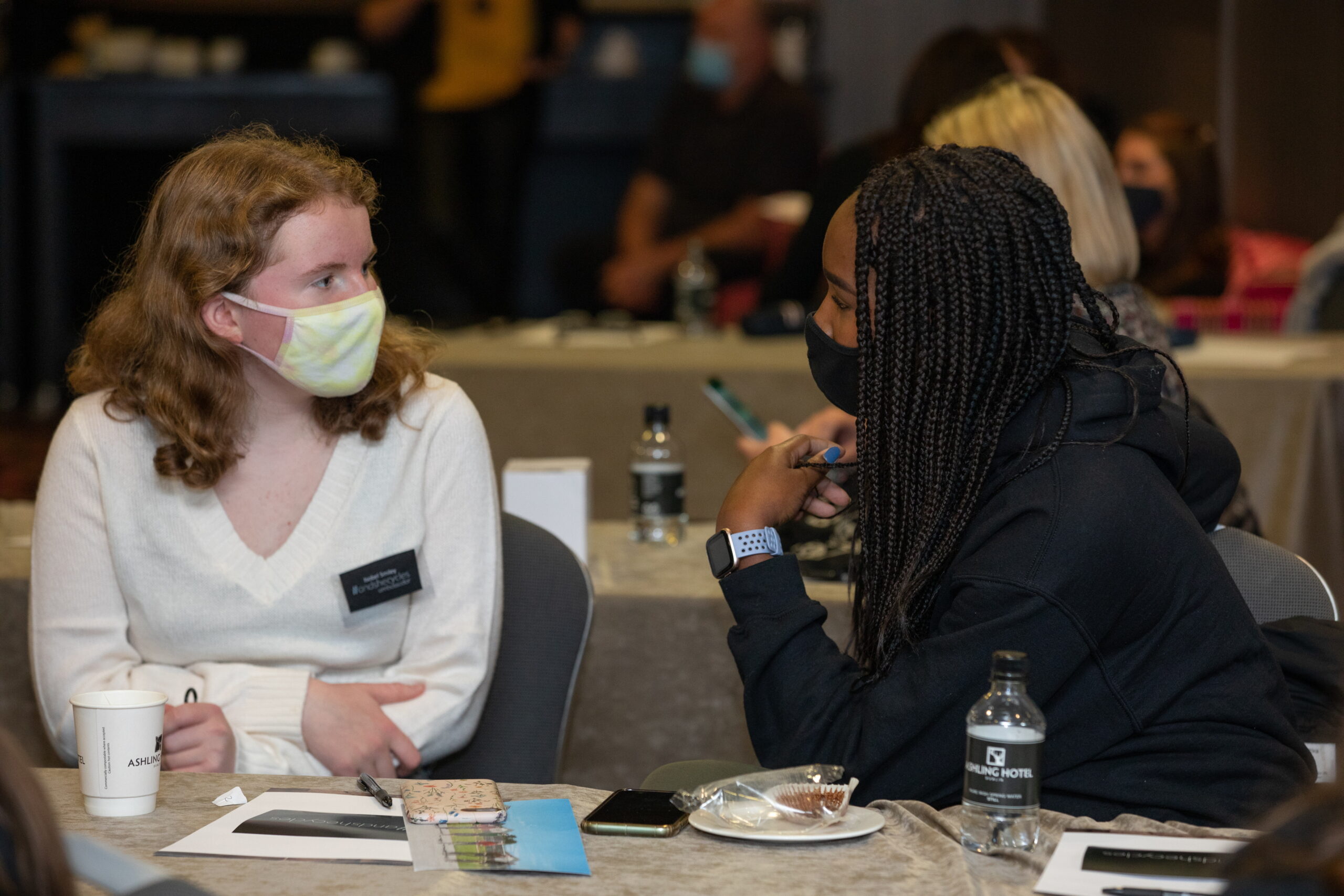 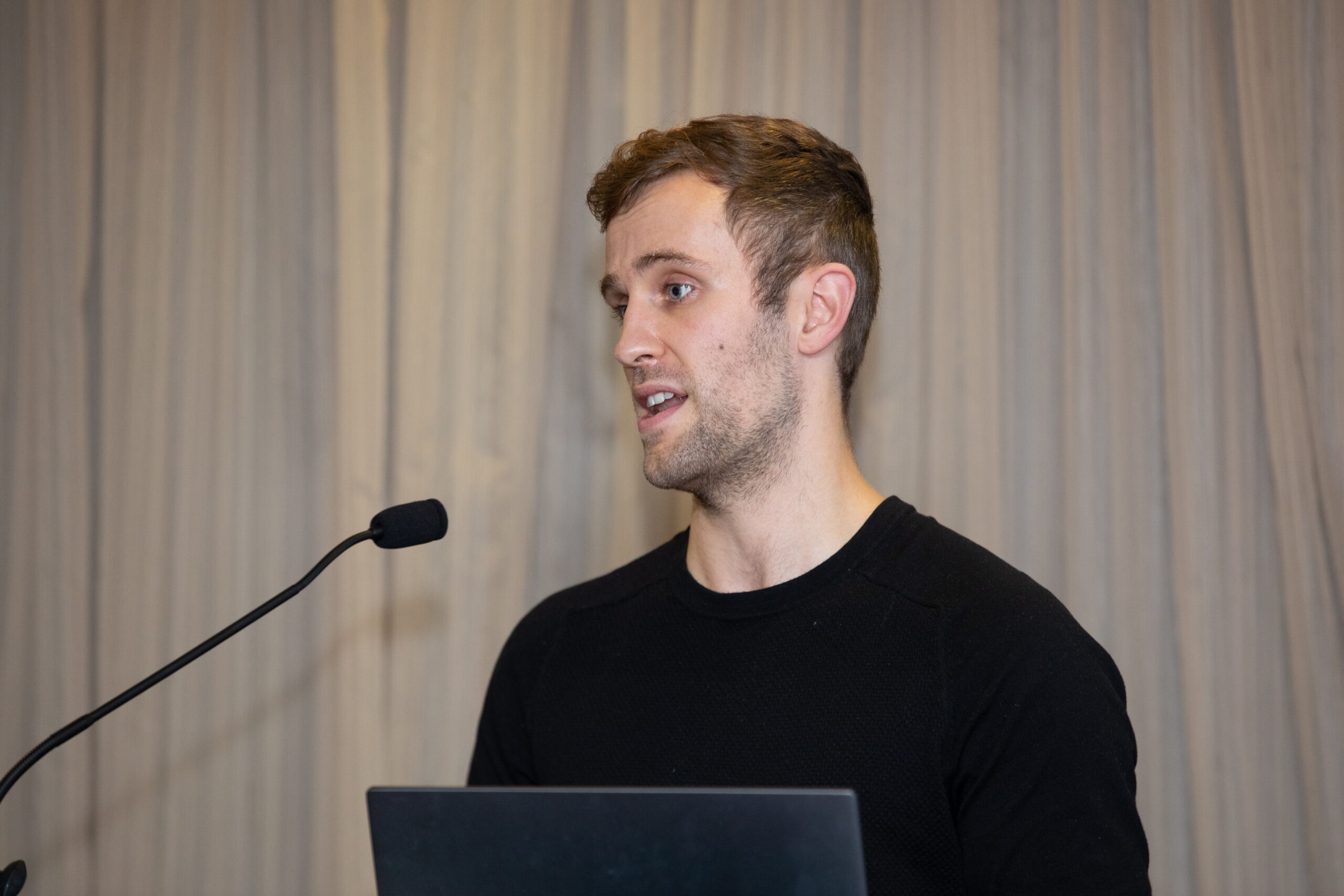 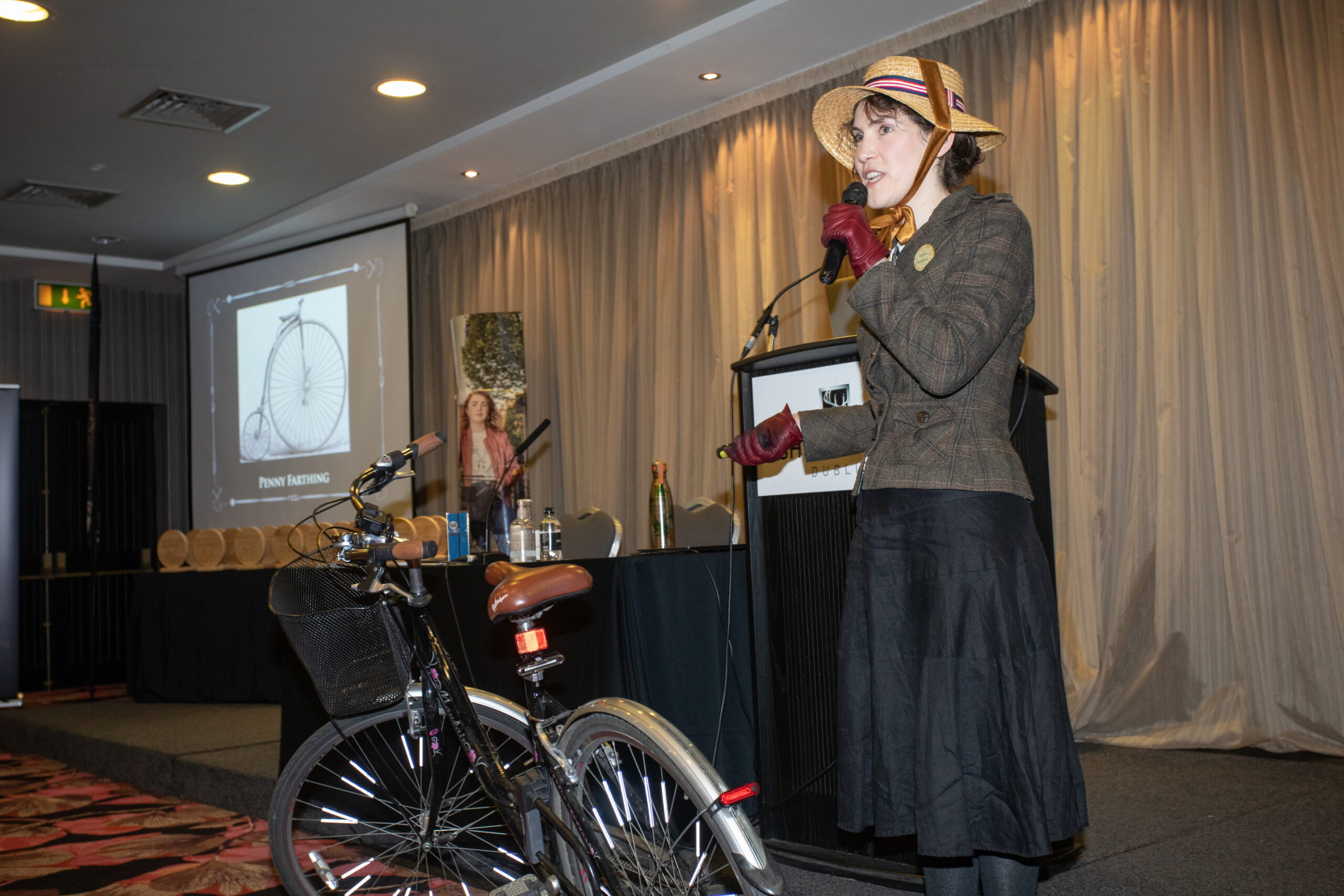